Bibliotaphy 2: A Note on the Type, or Two American Editions of Michel Houellebecq

[The English translation of the writer’s latest novel, Submission, was published this week in the United States. To commemorate the event, I dedicate a blog post to editions of two of his books that I prefer most of all].

The book scavenger is the bastard child of the lonely figures Baudelaire describes in Paris Spleen for whom multitude and solitude “are identical terms.” What is a room full of discarded books, at the corner of which there digs an isolated, thrifting harrow, but a crowd? I often watch them pick through books, their old sweaters stained rancid with yesterday’s milkshake, a filthy cloth bag bloated at their feet or maybe a shopping cart not even worthy of a beggar’s trash creaking at their side. The cart is the preferred vehicle of one type: the re-seller. Re-sellers scan a book’s bar code, put it down, scan another. They fill the cart, day after day, automatons of rubbish. A second type, this one with aristocratic airs, follows in their wake. These are the collectors, who frown on the re-sellers while chasing a vain hope that they will one day stumble upon a first edition of Moby Dick. Together they work in exile from all dignity, shoveling through the valuables a dead mother left to her uncultured children, who paused before the trash bin, turned, and thought a donation to the thrift shop would redeem them to their maker. One might even glimpse a collector’s face at times, spasmodic with the ecstasy of a find that will pay the rent, and recall Baudelaire’s line in “The Little Old Women”: “Où tout, même l’horreur, tourne aux enchantments.” Such was the scene in the yellowed still life where I first found The Elementary Particles by the French novelist Michel Houellebecq some years ago, and its taste has never left my mouth.

Scavengers may inspire pity to some, but not from the competition. They are the thrift store edition of the class divisions left over, like other rubbish, from the Industrial Age. I found The Elementary Particles in the windowless back room of a store where the books are kept in narrow aisles. At the back end of the room, old solid-state television sets make a wall of scratched plastic and glass; along the other wall, compact discs spill from their cracked casings. The books are in the middle, in the aisles between them, we scavenge. What better place to consider how Houellebecq is valued?

Some may recall the fawning and celebration that greeted Michel Houellebecq’s second novel, The Elementary Particles, fifteen years ago (the American edition’s title is identical to the book’s original French title, Les particules élémentaires, but its British title was an absolutely awful choice: Atomised). Their praise still echoed the world over when critics realized the infernal predicament they had gotten themselves into when praising Houellebecq, a man who gives interviews in grocery stores and passes out drunk at the podium. Some fans of pop culture may recall the uncomfortable moment on The Daily Show some years ago when Jon Stewart’s special guest, the philosopher Bernard Henri-Levy, described his new book of published correspondence with Houellebecq as an attempt to dissuade the novelist from committing suicide. Of Houellebecq’s crimes against literature and decorum, one stands above them all: the book-length love letter Houellebecq composed for none other than the god of all misanthropes, H.P. Lovecraft.

I first came across a copy of Houellebecq’s third novel, Platform, in a strip mall south of Nashville, Tennessee. The book store was one of those that specialize in the sale of publisher’s remainders at a slightly inflated price. The economic logic works in this way: the publisher’s write off the remainders as a loss, and get a tax break. The retailer buys up the remainders for pennies on the dollar, and resells them at a profit. Everyone wins, including the consumer who pays less for a relatively new book. I spotted the book, noted the remainder mark on the bottom edge, and read the first pages. The translation passed the first test, and Houellebecq’s narrative technique, which must be tasted in big bites rather than sentences, the second. A flawed copy, I tucked it in my coat, took it home, and later replaced it with an unmarked one from the stacks of one of the local donation hovels.

Looking at the first edition of Platform together with The Elementary Particles, one notes the consistencies of the jacket design: the contrast between dark primary colors and pastels, the embedding of photographs to amplify the color contrasts, the back cover a list of glowing reviewer’s quotes in desperate appeal for sales (“look here, a philosophical novel! Remember Camus? Beckett? Céline?”). Compared with its predecessor, The Elementary Particles, one notes also Knopf’s inverted design of the cloth bound edition: Platform’s blue spine with grey boards is reversed from the earlier novel (the yellow/blue binding remains the same, however). Yes, “a novel.” The phrase appears in small, pastel capital letters at the center of each dust jacket, a reminder to buyers who have not been keeping up their subscriptions to The New York Review….

I came across a used copy of The Elementary Particles several years later. In fact, I came across two. The better one went into my collection; I read the one with the cocked spine. I found them both in the span of one week. The first copy, that of the cocked spine, had a soft drink cup filled with ice resting on it. The ice had cooled the exterior of the cup, creating condensation that sweated down on the dust jacket in the hot store. Enchanted by the scene, which was “symptomatic,” to borrow a metaphor from one of the novel’s early chapters, of the book’s current metaphysical state in that particular thrift store – if not Houellebecq in America – I grabbed the copy and made for the door.

Of all the details that strike me today when comparing the two books, it is the “Note on the Type” that appears in the back matter of both novels. The inclusion of such notes is of course the territorial mark of a serious publisher. In the earlier novel, The Elementary Particles, the note is a short paragraph in length. It begins “[t]he text was set in Electra, a typeface designed by W.A. Dwiggins…..” and it concludes: “[i]t [the type] avoids the extreme contrasts between thick and thin elements that mark most modern faces, and it attempts to give a feeling of fluidity, power and speed.”

In the later Platform, the “Note on the Type” is doubled in length, and heavily revised. For example, we are told the inventor’s full name is William Addison Wiggins, and it was he that invented Electra type. And later, at the end of the first paragraph, a revised form of the big sentence that ends the previous version: “[i]n general, Electra is a simple, readable typeface that attempts to give a feeling of fluidity, power and speed.” An added second paragraph provides a biography of Wiggins, with an emphasis on how, after designing many widely used typefaces, he later cultivated his interest in the design of marionettes.
Knopf prints Houellebecq’s fiction with the characteristic components that signal “literary fiction” to readers who note such things. From the translator to the ink and cloth in the printed page, editions of Houellebecq are thus afforded the best labor and materials in terms of commodity production. Yet the fact remains that few contemporary European authors in English translation generally have collectible value, and prices for a once highly sought after author, such as Umberto Eco, have tumbled. This is not a reflection on the quality of the literature, but an effect – a symptom – of the lack of translators, or rather, funding for translators, publicity for such books, and of course, the old saw horse of a vapid stateside culture. Much has been noted of the dearth of funding for translation, and there is no need to review it here. Yet the fact remains that literary works in good recent translations are few. Copies are scarce in the dumps of a southern state such as mine where one has to wait for a dead professor’s children to donate a library to the Salvation Army store in order to perhaps find a book of note. 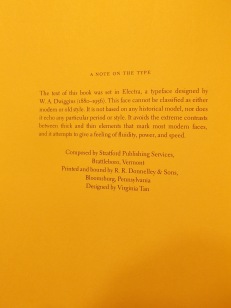 Regardless, it would seem that Houellebecq is collected by some, but they are few. The collectible emphasis, in the American market, is focused on the foreign editions, particularly the French and British (with some German editions of Houellbecq’s mixed media works also of note). For the American editions, collectible value is so low as to not merit any mention.

I have the sense that Houellebecq’s “scandalous” reputation, upon which he has commented at length, has played some role in the value dynamic. Such dynamics are volatile, of course, and might quickly turn in the market’s favor. One could imagine a scenario in which a Tea Party crackpot might latch onto a novel by Houellebecq in order to vanquish the ghost of Sarah Palin, and utterly distort, misquote, and adopt the novel to some grotesque end (the right-leaning New Republic has already made a half-hearted attempt at defending Houellebecq’s portrayal of Islam in Submission). It would be an unlikely scenario, however, given the prudishness of the far right wing in America, as Houellebecq’s novels are too casually explicit for its constituents. Indeed, Houellebecq’s fiction has also disgusted his liberal readers in America, and when both sides express outrage, it is generally a sure sign of some literary merit.

This hypothesis, in which scandal, or scandalous misappropriation, drives up value, would rest on the even more grotesque assumption that ideologues actually read, and that by doing so they might drive sales to levels comparable to the incredible figures Houellebecq’s publishers enjoy in Europe. Perhaps it is better such things have not come to pass, so that nobody will have to listen to wingers right or left pervert Houellebecq’s fiction to their American manias. More importantly, the scant attention makes it possible for book collectors to find his books at a modest price. Oblivion keeps the collectible value low and prevents wealthy plutocrats from lining their shelves with exotic things such as books; we all know that in Reaganomics, the dew doesn’t fall from the vine. As for the left-wing brand of neo-liberalism, I quote Fred Jameson: “market as a concept, rarely has anything to do with choice or freedom…”

The market: it recurs endlessly through Houellebecq’s work, but also suffuses their commodity form. Who will notice? Enter the scavengers and marionettes, symptoms of the type.

My Blog
A Sweet Fishing Life

Rough fish in the river

Appreciating all the river has to offer